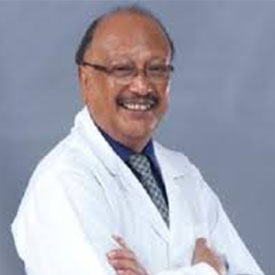 Produl Hazarika is presently working as an otolaryngologist in NMC Specialty Hospital in Abu Dhabi, UAE. He is a former professor and head and director of post graduate studies of the department of Otorhinolaryngology and Head & Neck Surgery in Kasturba Medical College, Manipal, India. He has 28 years of clinical teaching experience both at the undergraduate and postgraduate levels, with over 100 publications in various national and international journals. He was selected as international guest scholar by the American College of Surgeon in 1986 and has travelled widely to the US, Australia, UK and Malaysia, Switzerland, Mauritius on various fellowship programs. He has conducted various operative workshops abroad and in India. He has taken up an overseas assignment for two years as a consultant and head of the department of ENT, Armed Forces Hospital in Kuwait. He was an elected chairman of editorial board of Indian Journal of Otolaryngology and Head & neck Surgery for the years 1996 to the year 1999. He was appointed as external accessor by University of Malaya, Kuala Lumpur, Malaysia from August 2000- April 2005. He was the examiner for both undergraduate and post- graduate student of various universities of India He had done pioneering work in Surgical Rehabilitation of laryngeal patients in India. He has also introduced voice prosthesis known as HRA Prosthesis. He was the first surgeon to introduce Nucleus 22 Channel Nuclear Implant in India in March 1995. The surgical team headed by Dr. Hazarika has popularized skull based surgery in India during the late 80’s and early 90’s. He was instrumental in introducing KTP-532 Laser for the first time in a teaching institution and had carried out extensive laser work. He is the author of three otorhinolaryngology and head and neck textbooks. He is an invited speaker in various national ,regional and state conferences organize by otolaryngologist.

Drop us an email for Program enquiry
otorhinolaryngology@scientexconferences.com